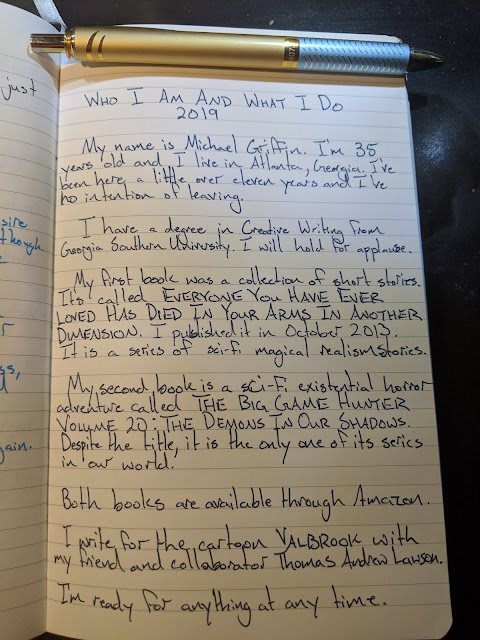 
Man, I forgot to say it Wednesday on the official date, but it's the two-year anniversary of the release of EVERYONE YOU HAVE EVER LOVED HAS DIED IN YOUR ARMS IN ANOTHER DIMENSION! That's right, it's finally learning how to walk on its own and I couldn't be more proud and embarrassed that it didn't start sooner.

From Monday until Friday, the digital version is FREE FIDDY! That's right, all you have to do is download the Amazon Kindle App to whatever device you're using and you can have an interdimensional collection of micro-fiction for free:

Wait, you want me to make money? That's sweet of you, but I really just put this book together to impress chicks! Okay, here's a bunch of ways you can buy the physical version:

1. I've got like ten or twelve copies on me right now that I'm selling for ten buckaroos apiece. I'll sign it with my special gold pen for you with an obscure quote of my choice. I will then buy ice cream or whisky with that crisp ten-dollar bill.

2. Live too far away? Well, I make the most money from CreateSpace, the place that prints it: https://www.createspace.com/4503357

Thanks to everyone who's already bought the book--you really make it worthwhile for me to spend years at my computer typing weird stuff. Hey, maybe leave a review on Amazon? It'd mean the world to me!

~ALL THRIVE~
Posted by Michael Griffin at 11:03 AM No comments:

No Matter Where You Go

(There you are)
Here I am, in the middle of a few days off. I’ve asked for extra time off the work-for-tips-gig so I can write more of the weirdo sci-fi-horror-adventure-cartoon-comics stuff that’ll presumably be the base of my future life.
And I’ve recently finished up the work I had planned for Big Game Hunter. Short of feedback and changes from an editor, this is the final draft on my end. Aside from little tweaks and typos I somehow still find on the regular, that is.
But it’s just making me think about everything in my life, as I am wont to do. Hell, even I’m tired of my constant self-analysis.


I’m pruning a 60 page sample of the book for submissions to whatever publishing companies have open submissions right now. I have to include a several-page-long synopsis of the whole thing, alongside a cover letter identifying the even-broader details.
It’s kinda taking me forever. Not just because I get easily infuriated trying to put my book in a digestible pill form (though I’m dreading even more another publisher that only wants five pages--there’s no way to get this book in five pages). But I just know I’m going to be rejected, right? In four months I’ll maybe get a form letter not even saying it’s a combination of too weird, too specific and too inaccessible. They’ll just tell me it’s not what they’re looking for.
I’ve gotten that a bunch with my short stories. It’s mostly what I get when I submit to anything in the writing industry. And you know, that’s just how it goes. You get rejected a bunch and hope you’re not fooling yourself about who you are and what you’re good at.
I’ve said it before and I’ll undoubtedly say it many more times: I’m too stupid to stop doing what I do. It’s not like I’ve got some kind of career going for me in any case. I don’t have anything to fall back on. And it doesn’t help that I’m prone to existential crises, eh?
So what am I bitching about exactly? Oh, never anything specific aside from the feeling that I’m losing time on things that don’t matter. That applies to a great deal of my life, I suppose. I recently read through my journals for the past five and a half years since my father died. So much of my excitement with projects I was working on and people I met ended with almost immediate disappointment. Those few moments of elation typically deflated quickly--either by something I screwed up, or the circumstances of the situations, or people being themselves, or simple lack of reciprocation.
I guess it would be the last one that frustrates me the most, though I figure it’s because I don’t give others something to respond to. I can only assume it’s an operator error, because that’s what I’ve got control of. The world is weird and big, so you never know another’s circumstances.
But I’m a writer. I can imagine all sorts of reasons why someone wouldn’t want to respond to somebody else--all the way from the signal-to-noise “I don’t see this because I don’t really have a dialogue for it” to circumstantial “I got this text at an awkward time and never responded” to intellectual “I’m not going to meet this dialogue” to frustrating, deliberate, silence.
The last one is easy to assume. It’s even a joke I have with my roommate that nobody ever responds to my messages. I usually get news after the fact, either from more popular friends or being perceptive or getting in late to the (figurative or literal, your pick) party.
But here I am, stupid as ever, just plugging away and trying to get myself out there over and over again. Because I don’t have any fallback plans for self-satisfaction. Because settling for anything less than making a living doing the things I want to do and meeting someone who energizes me and challenges me (and yeah, returns 80% of my texts) is tantamount to suicide in my view.
But I have to deal with the here and now. And sometimes it feels like I’m getting nowhere quick except six feet in the ground, buried under a few hundred pages of Courier New. I mean, aside from ostensibly working for something bigger and better, my life doesn’t satisfy much of my ideas on the ideal.
So I have to figure something out. And I’m always trying to do that. I try to get out more, tell people what I do, what I’m excited about. But the flip is that I’ll always feel like a moron because I understand my weaknesses so well. I know how my intelligence works. And all it is? It’s just my brain working as fast as it can to correct the million mistakes I make every minute. I’m good at it now. That’s skill, you know? You always get better over time.
Sorry for the length (ladies). I try to keep this stuff in my head, but sometimes you have to ball something up and throw it into the sun.
It’s just--I wish I had a little extra luck, is all.
Posted by Michael Griffin at 4:26 PM No comments:

My name is Michael Griffin. I graduated from Georgia Southern University with a B.A. in Creative Writing and I now write novels, animation, short films and short stories. I've published a collection of short stories, EVERYONE YOU HAVE EVER LOVED HAS DIED IN YOUR ARMS IN ANOTHER DIMENSION, which you can buy in print or digital HERE.

My next book is in the peer review stage and is titled THE BIG GAME HUNTER (VOLUME 20: THE GOBLINS IN OUR SHADOWS), an existential sci-fi-horror-adventure. Sorry about the genre bender; I'm still working out how people see it. After that, we've got SINNERS, a graphic novel about the apocalypse happening in the 1600's. After that, there's QUIET KILLS ON THE SUPERNOVA'S EDGE, a transcendental space romance set in the distant future. And another big novel after that. I've got plans.

My animation work includes VALBROOK, a series about the weird and funny world of the Southern United States. I co-created it with Thomas Andrew Lawson, with whom I worked on Nintendo parody cartoons as Tanooki-Kuribo Productions. We're now known as Zero Point, and we're nearing 20 million views on our videos. Man, that's a big number. We've got some other projects in the buffer like THE PRIESTESS POWER HOUR

I also edited the fan motion-comic THE DEATH OF SPIDER-MAN made jointly by Zero Point and Arrival Point Productions, adapted from the Marvel comics by Brian Bendis and Mark Bagley (among others).

You can reach me at michaelsgriffin@gmail.com or captainradd@gmail.com if this is the only moniker you want to remember. Hell, I'm on Instagram, Twitter, Imgur and Tumblr as captainradd, so that's probably just fine.

For the most part, I work on my own original properties, or new things with Zero Point. Just writing my name in water, kittens. But remember...no matter where you go, there you are.
Posted by Michael Griffin at 6:59 PM 1 comment:

Sorry for the lo-fi aspect of this post but here's the new cartoon!

Posted by Michael Griffin at 12:25 PM No comments:

Valbrook: The Secret of the South Chapter 1 is LIVE!

We're on for a long ride, so I hope you enjoy it!
Posted by Michael Griffin at 6:27 AM No comments: 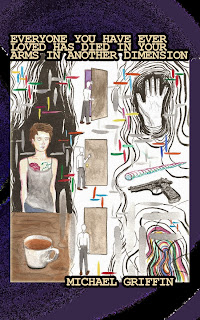 The print version is now live on Amazon! It's in the Kindle Matchbook program, too--so when you buy this version, you can have the digital one for free!

Posted by Michael Griffin at 8:44 PM No comments:

Michael Griffin
Atlanta, GA, United States
Writer, Editor michaelsgriffin@gmail.com
Also I am one of the main dudes at Zero Point and Valbrook. I'm the heavy hitter on the writing. And the metaphors. If there's a metaphor, rest assured it was probably me.